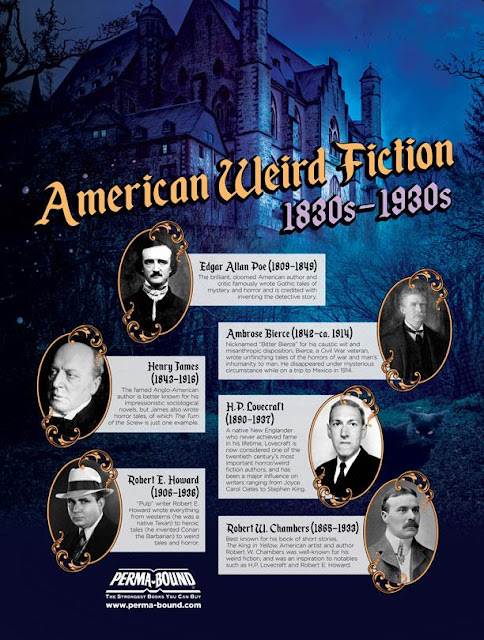 And check out these short story collections available from Perma-Bound!
(Click on the Cover for Ordering Information)

The brilliant, doomed American author and critic famously wrote Gothic tales of mystery and horror and is credited with inventing the detective story.

Nicknamed "Bitter Bierce" for his caustic wit and misanthropic dispositions, Bierce, a Civil was veteran wrote unflinching tales of the horrors of war and man's inhumanity to man.  He disappeared under mysterious circumstances while on a trip to Mexico in 1914.

The famed Angle-American author is better known for his impressionistic sociological novels, but James also wrote horror tales, of which the Turn of the Screw is just one example.

Best known for his book of short stories, The King in Yellow, American artist and author Robert W. Chambers was well-known for his weird fiction, and was an inspiration to notables such as H.P. Lovecraft and Robert E. Howard.

A native New Englander who never achieved Fame in his lifetime.  Lovecraft is now considered on of the twentieth century's most important horror/weird fiction authors, and has been a major influence on writers ranging from Joyce Carol Oates to Stephen King.

"Pulp" writer Robert E. Howard wrote everything from westerns (he was a native Texan) to heroic tales (he invented Conan the Barbarian) to weird tales and horror.